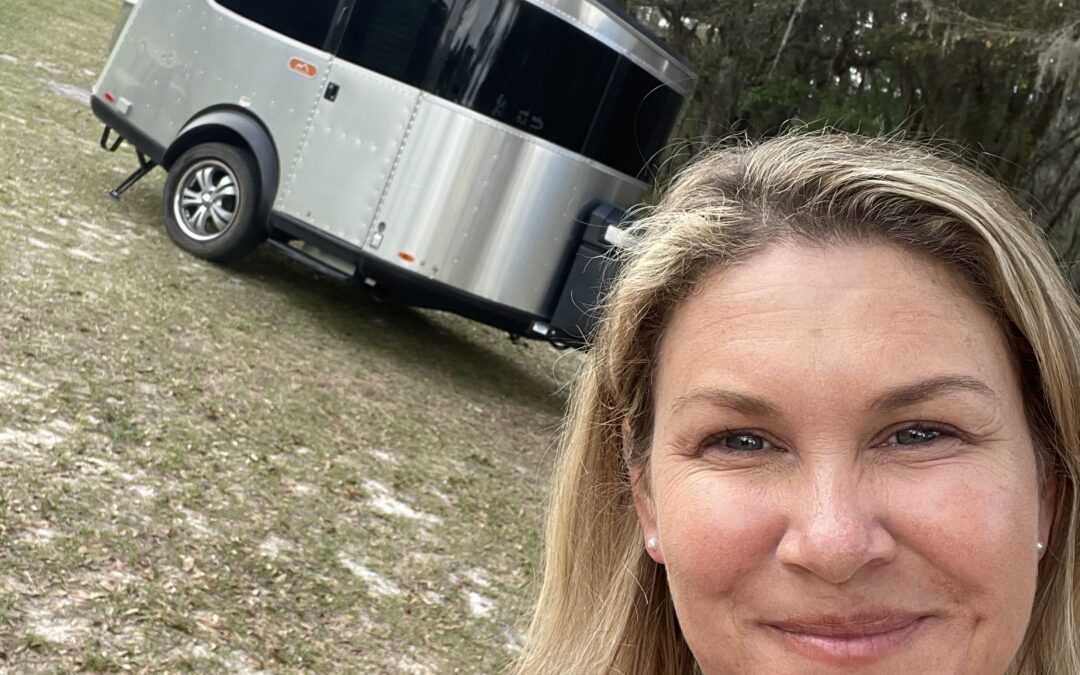 The RV Atlas podcast is back for the 2022 SEASON with a series of life (and rig) updates from Jeremy and Stephanie. The big news is that we are a two RV family once again! Stephanie has a brand new rig. And so does Jeremy. The first four episodes of our 2022 podcast season will be an update about our new rigs and our separate shakedown trips in those new rigs. Let’s start with Stephanie’s “new to her” Airstream Basecamp 16!

An Office, a She-Shed, or a Basecamp? 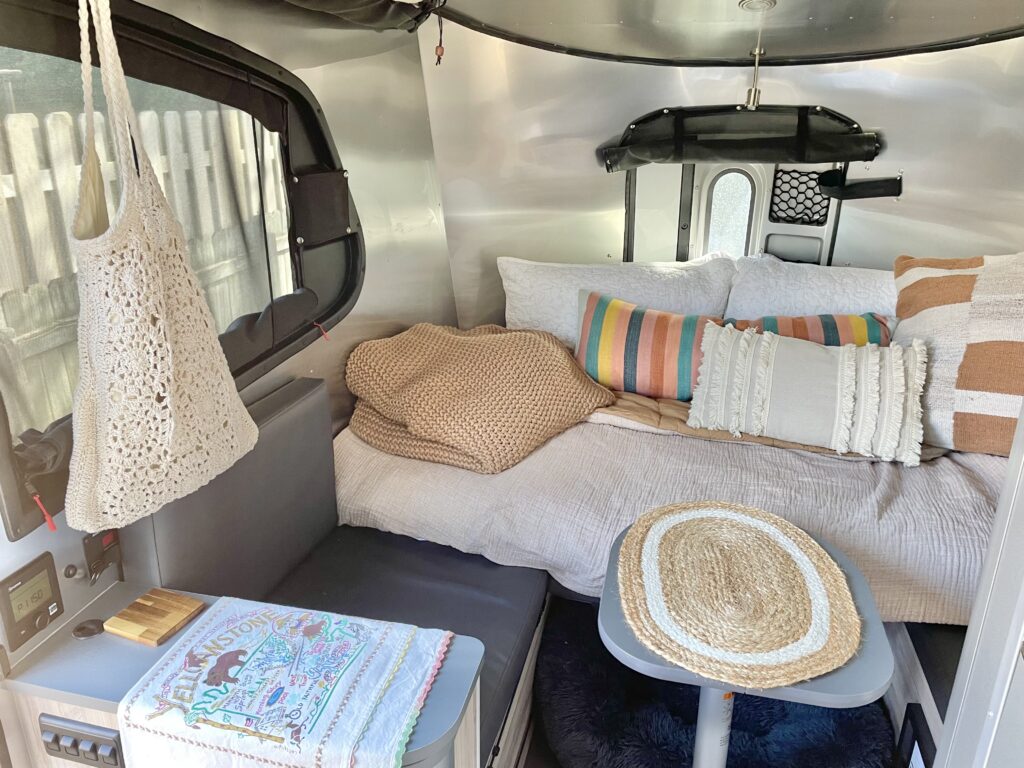 Stephanie was thinking about building a small office on our property. Or buying a vintage Airstream and fixing it up for a backyard office/she-shed. Working from home can be challenging, and she really wanted a work space where she wouldn’t need to hush the kids up during meetings or times when she was trying to concentrate on a big project.

Then a listing for a lightly used 2018 Airstream Basecamp 16 popped up on our longtime dealer’s website. Jeremy was getting ready to pick up his new Ember unit there anyway. So Stephanie decided to head to White Horse RV Center and take a look. The price was pretty reasonable and the pictures looked good! Could this be the she-shed of her dreams, while simultaneously being usable for solo getaways and work projects? The possibility was certainly intriguing.

Jeremy had also been pushing her away from building a permanent structure on the property when she could buy an office on wheels and also use it for solo travel and work projects.

She went to look at the Airstream Basecamp 16, and she loved it.

To listen to Jeremy interview Stephanie about her “new” 2018 Airstream Basecamp 16 on the RV Atlas podcast, click on the media player above or subscribe wherever you get your shows.

To watch Patrick Botticelli’s tour of the Airstream Basecamp 16, click on the video below! 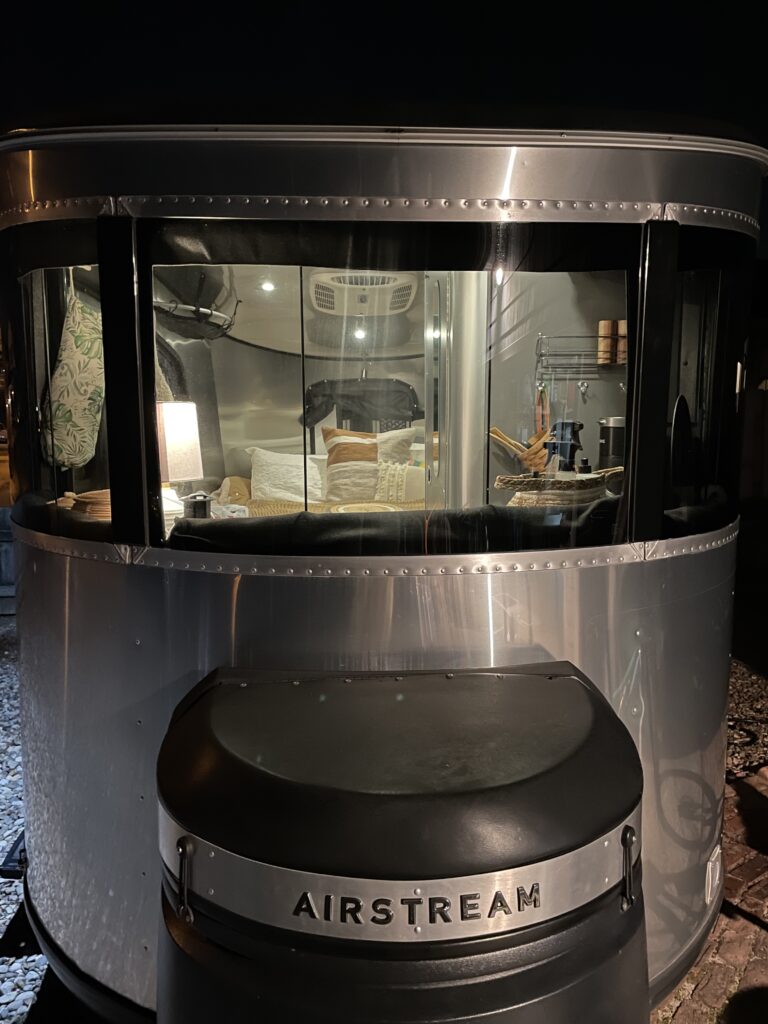 Stephanie has actually loved the Airstream Basecamp 16 since it was re-released at Hershey a few years ago. The funny thing is that she actually likes the smaller floor plan better than the bigger one. Because she likes the front kitchen as opposed to the front dinette. A comfortable workspace was very, very important to her. She actually felt like she never had an RV with a dinette that was really comfortable to work in. She used to carry a table and chair out to the Eagle to work. In recent months, she has used a standing desk at home and thought the front kitchen in the Airstream Basecamp 16 would be perfect place to use that standing desk and be able to look out the wraparound front windows.

So she went to look at it and she was 100% not planning on buying it–because she wasn’t in any real rush. She spent a lot of time just hanging out in it and that confirmed that she just loved the feel of it inside for such a tiny trailer. The front panoramic windows bring in a ton of light. The side and back door both have screens for great airflow which is super important feature for her. She also hates using AC unless it is really hot. Then our dealer gave her a number that she just could not refuse. It would have been foolish to say no because because she knew what the market was and I figured if it didn’t work she could turn around and sell it for more.

So she bought it!

Solar was not on the spec sheet so she was really excited when she found out it has the factory solar package. No inverter though, so just 12v. She is considering getting a small inverter…nothing big. However, our truck does have a 110 outlet, so it’s really not an emergency. But either way, getting a good price and getting it with the solar package felt like a huge victory!

Her Airstream Basecamp 16 did not come with a microwave, but it has the space for one. And she does need a microwave. She is a cook, She has always loved to cook. But after 13 years of 3 squares a day (particularly when kids were at home 24/7 for awhile) she is really burnt out on cooking and has no desire to do that when she is getting away for a few short days. So she ordered the right microwave from Airstream and it arrived just in time for her big trip to Florida. 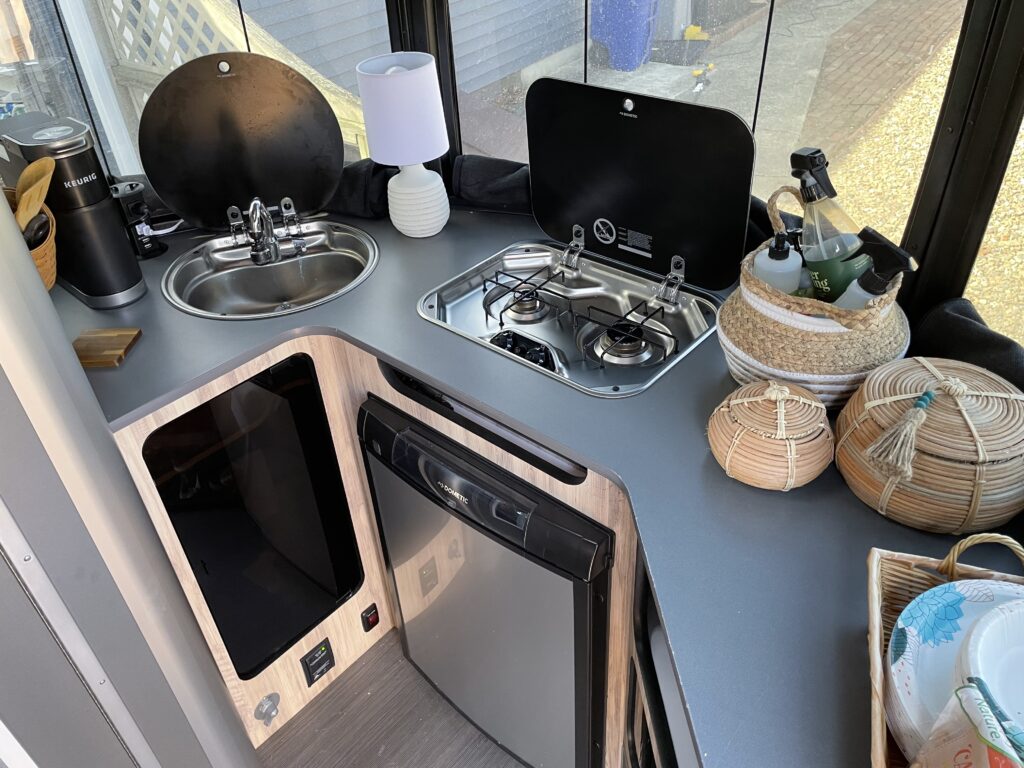 The Airstream Basecamp 16 was pretty perfect which was why she was so attracted to it. She was not looking for a project (like with Penny) and she WAS looking for something super simple without a lot of bells and whistles.

BUT the most obnoxious thing ever to her is setting up and breaking down a bed in an RV. She has always hated it. This is why we got rid of our first pop up in the first place. In the Basecamp  it’s either two couches or one big bed. She wanted a smaller bed with sitting space that could be set up like that all the time. In order to do that she had to split the boards that hinged out to make the base of the king sized bed. So now she has a bed permanently set up in the back half with two seats and a table in the middle. It’s perfect.

Things She Loves About the Airstream Basecamp 16 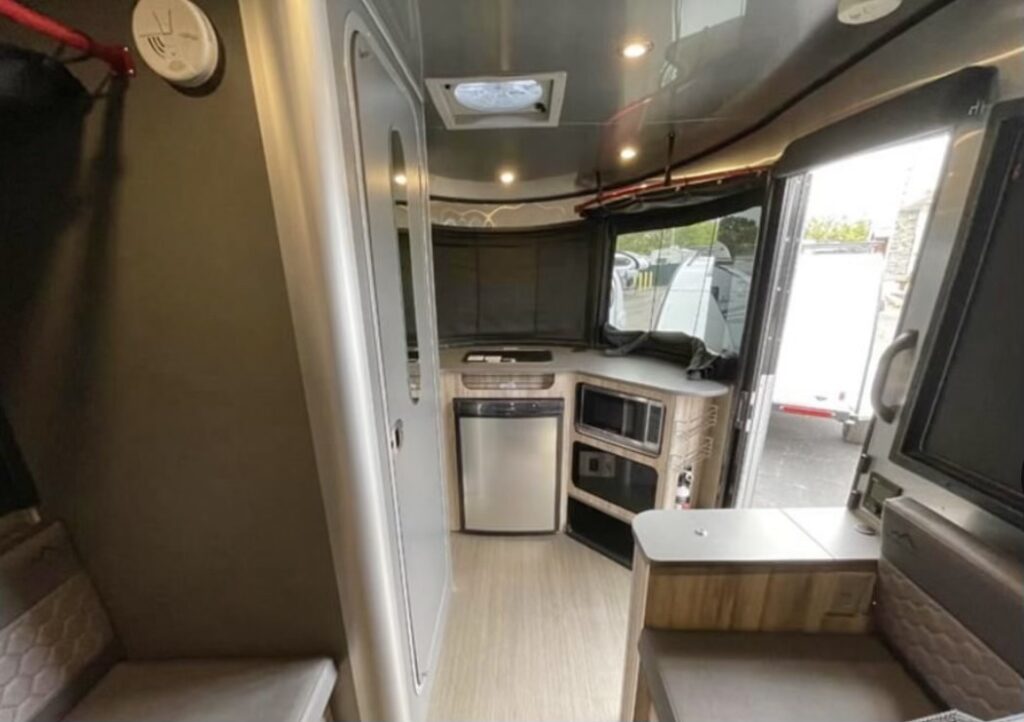 Things she really loves–the front kitchen, the light, the space, the storage, the tank heaters, the Truma Combi works great although it was a beast to figure out how to winterize. The air works well and isn’t too loud (She was in 90 degree heat and it stayed cool).

So now she has owned the Basecamp for about three weeks.  Worked in it for two weeks. And traveled in it for one week. So she thinks it is pulling its weight!

We’ll talk more about her 8 day roadtrip to Florida in the next episode of The RV Atlas!