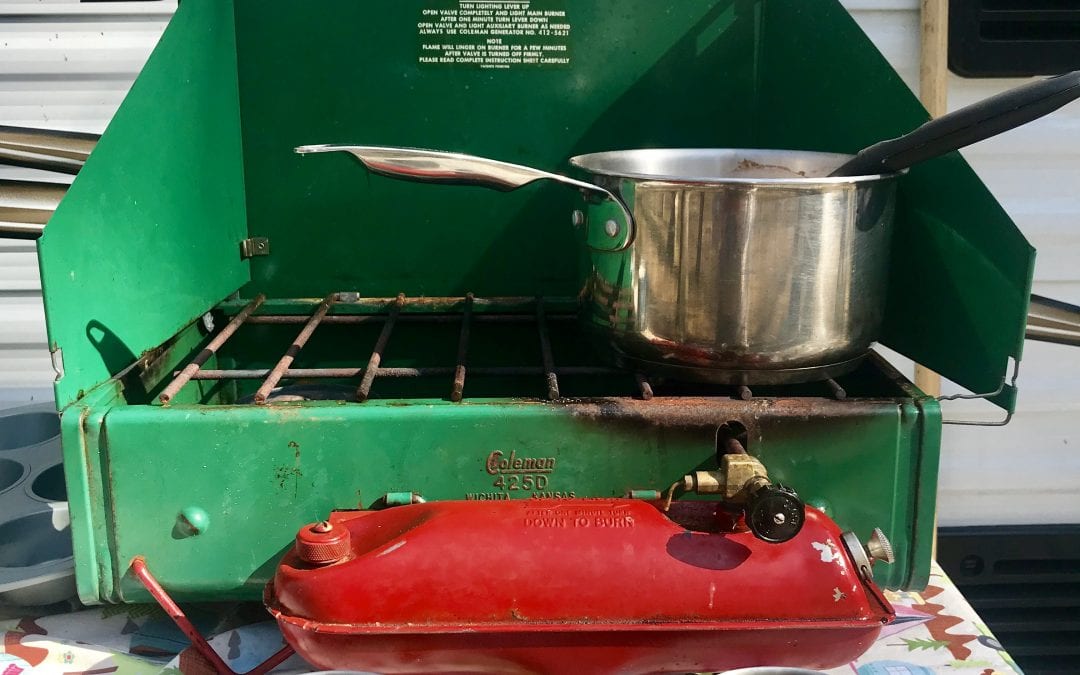 For the last two years I have been in denial about my “collection” of classic Coleman lanterns and stoves. Not in denial that they exist, but in denial that I was actually “collecting” them. I had stopped counting how many I owned and when Stephanie would ask me I mumbled a smaller, inaccurate, single digit number under my breath. I knew she would never count them up. But I finally have. I own 11 classic Coleman camping stoves and 16 classic Coleman lanterns. There. I said it. And it feels good to say it. Even thought I’m sure that in some grand cosmic sense, I have bought too many of them.

27 pieces of classic Coleman camping gear might be right for some other guy, but I don’t think it is right for me. Collections bring joy to some people, and chaos to others. I’m probably sitting somewhere in the middle of that equation–just trying to make some sense of my own habits. I don’t regret collecting what I’ve collected, but I’m looking for some clarity for the road ahead. To collect or not to collect? That is the question. It’s a question I have been asking myself a lot lately anyway.

**To listen to Jeremy and Stephanie discuss Jeremy’s classic Coleman camping gear addiction on today’s episode of The RV Atlas, click on the media player above. Or just keep on reading right here!

Two recent and divergent incidents have caused me to rethink the whole idea of collecting things. About a month ago my buddy Hector made me a beautiful handcrafted hard case for one of my favorite Coleman Kerosene Lanterns. His gift caused me to pull out my lanterns and fire them up for the first time in a few months–and man oh man–are they awesome! They light up the night with a warm glow and a soothing hiss that has comforted campers for generations. These “fueled” lanterns have a magic to them that an LED Lantern will never be able to recreate. So this incident made me love my lanterns again. 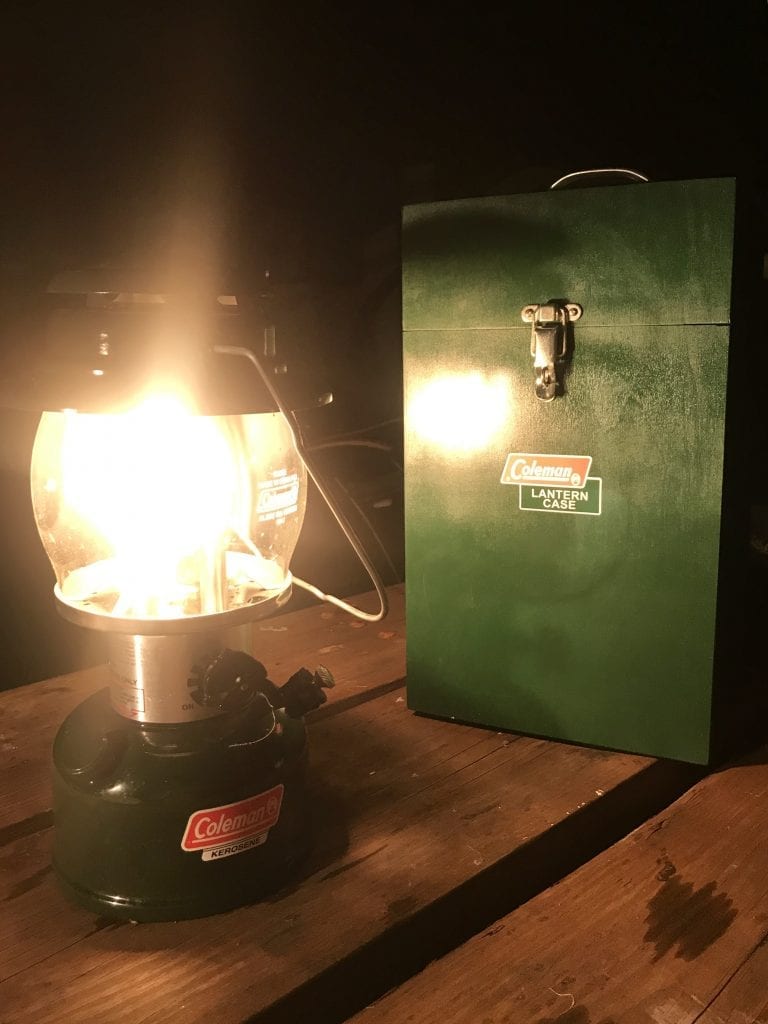 But then a few weeks later I was cleaning out the garage (or attempting to) with my six year old son Wes. We were clearing out and reorganizing a shelf that was filled with my camp stoves. Wes looked at me quizzically and asked, “Daddy, why do you have so many camp stoves that you don’t use?” His innocent question filled me with existential dread. Yes, indeed. Why do I own so many things that I don’t use? I didn’t have a very good answer for him. In fact, I didn’t have an answer at all. 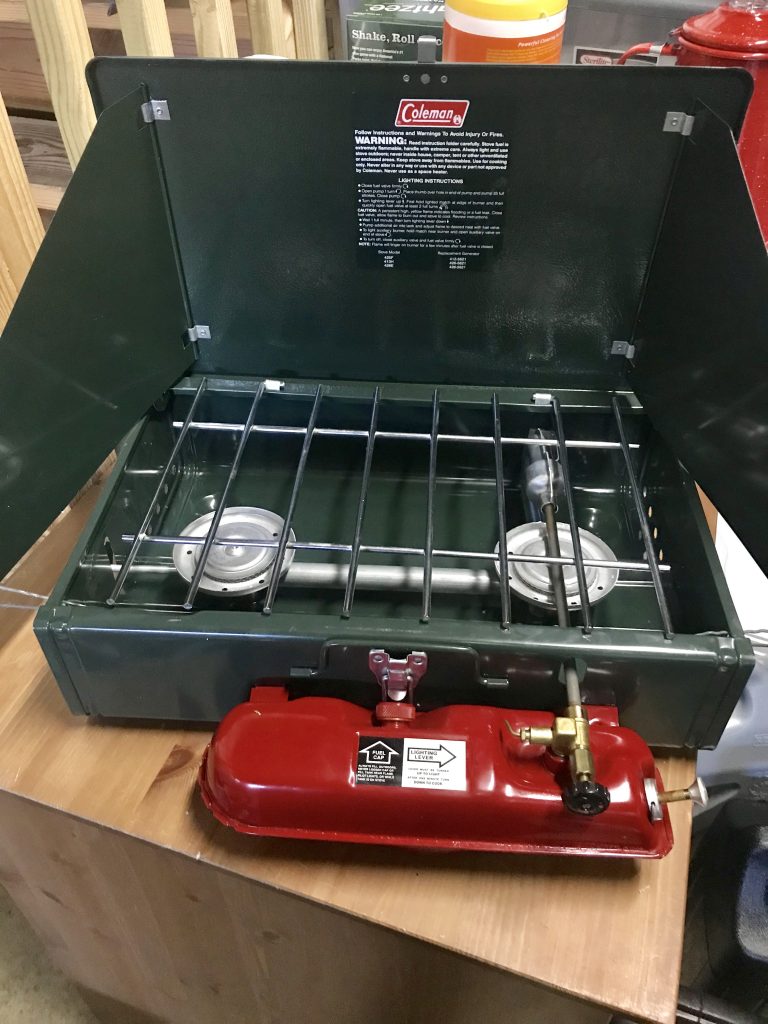 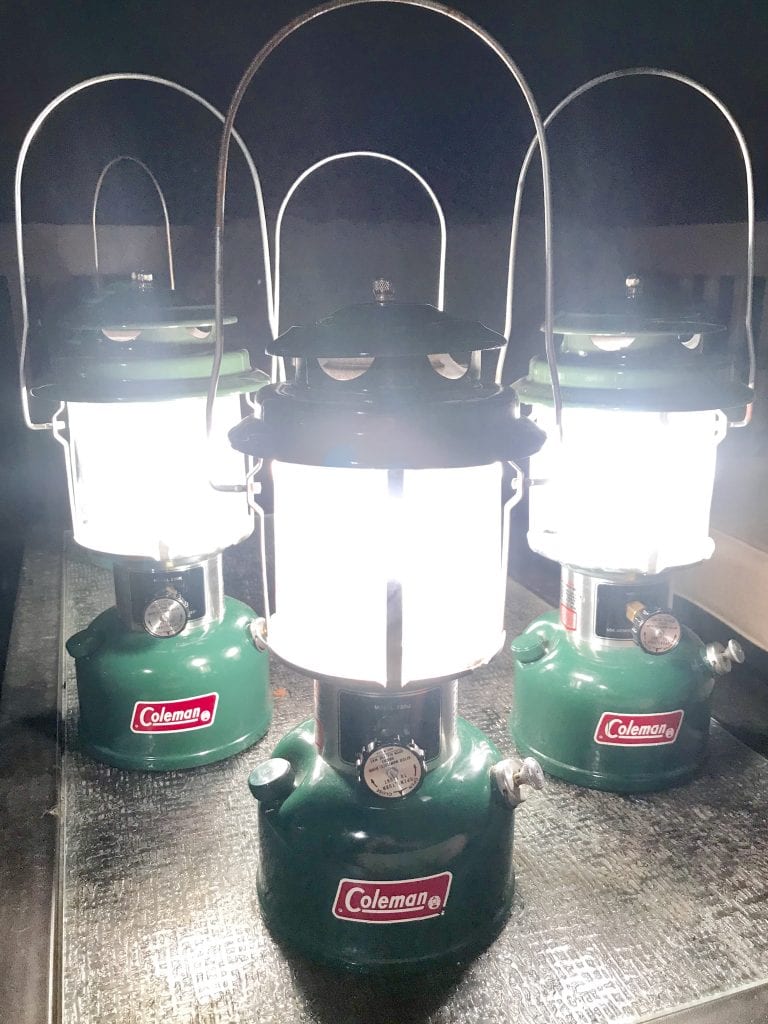 When I was a kid my grandfather was a bit of a hoarder. He was a kid during the Great Depression and he grew up extremely poor. He did not always have a pair of shoes to wear. Eventually he became financially successful, and I think that hoarding tools and supplies (he didn’t really collect them) gave him a sense of security. I’m pretty sure he passed that hoarding gene on to me. There is a nebulous overlap between hoarding and collecting that each human must define for themselves. For me, personally, I think they are one and the same. For me “collecting” is just a euphemism for hoarding.

When I was in college I started to collect books and seek out first editions by writers that I admired. I mentioned this in passing to one of my favorite English professors and he gave me a look of concern and explained why he had never collected books. He told me that he liked to own the spirit of a book more than the book itself. His words really inspired me to rethink my “collection” and the time and money I was putting into it. I stopped seeking out rare books soon after and only bought a book if I wanted to read it or needed it for class.

So basically what I am saying is that I’m a bit of a contradictory weirdo when it comes to collecting. I have a very strong impulse to collect things, but I am acutely aware of the dangers of getting obsessed with chasing them down.  The danger of spending too much money. The danger of creating clutter and mess in your living space. And perhaps most profoundly, the danger of wasting time that you can never get back.

How My Coleman Obsession Began 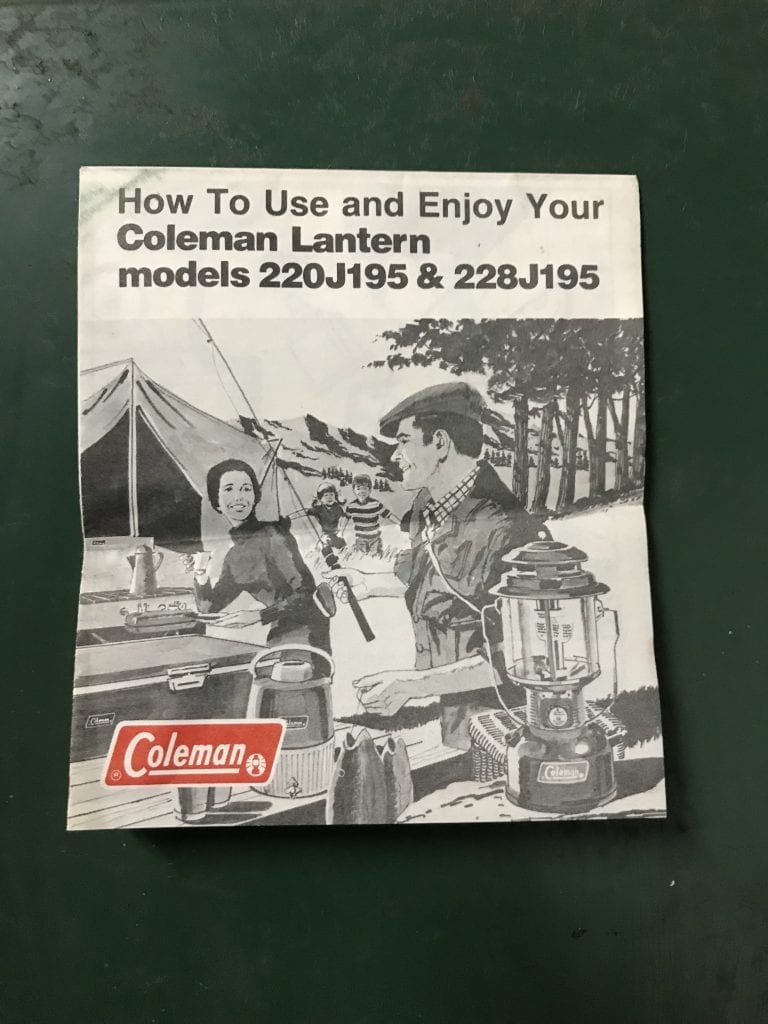 They are strange and exotic looking things when compared to today’s tamer (and lamer) propane camp stoves. They are larger and bulkier and they look like metal suitcases when they are folded up. I have always found that classic Coleman green to be a ravishing color. Pair it with a fire engine red fuel tank that hooks on to the front of the “suitcase” and you have one of the most iconic products in camping history. Second only perhaps to the iconic Coleman Lantern which it was so often paired with. As someone on our RV Atlas facebook group recently wrote, “If you weren’t camping with Coleman gear back in the 70’s and 80’s, where you really camping?” Phil’s stove also had just the right amount of surface rust to add even more authenticity and character to his timeless piece of Campmericana. 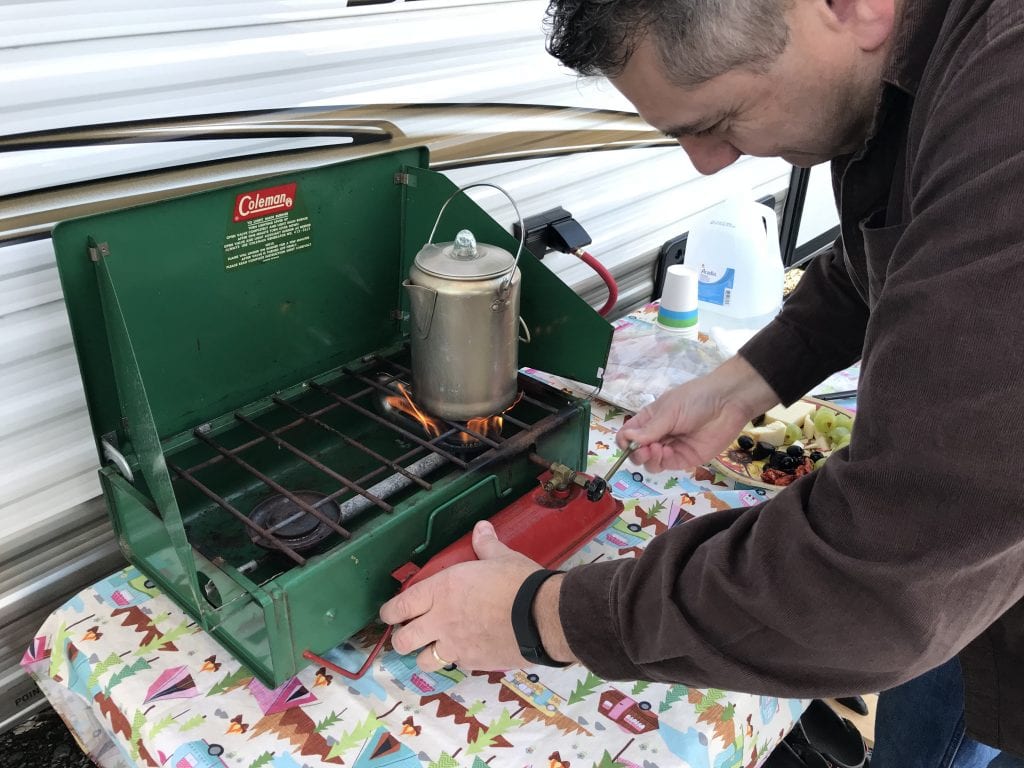 I asked Phil where he got the crazy looking stove and if it still worked. He told me he bought it for five bucks at a yard sale and then he proceeded to pump up the tank and fire it up for me. This green and red beast, which was built in the 1960’s, was just too legit to quit.

I immediately told Phil that I had to have one for myself. Then he blew my mind again. He told me that his classic Coleman lantern had a broken globe and that he was heading over to the Coleman outlet store right there in Lancaster to get a replacement! Maybe they would have a Dual Fuel stove for sale, he suggested.

I had no idea that Coleman outlet stores even existed! The thought that they might still sell these funny looking old stoves seemed absolutely amazing to me. A few hours later we were in the outlet store and I was looking at Dual Fuel stoves and Lanterns that were the modern equivalents of what Phil had back at the campsite. I felt like we had just driven in a time machine to a campground from the past. I felt a powerful wave of nostalgia washing over me. Nostalgia for a time and place that had never been my own. 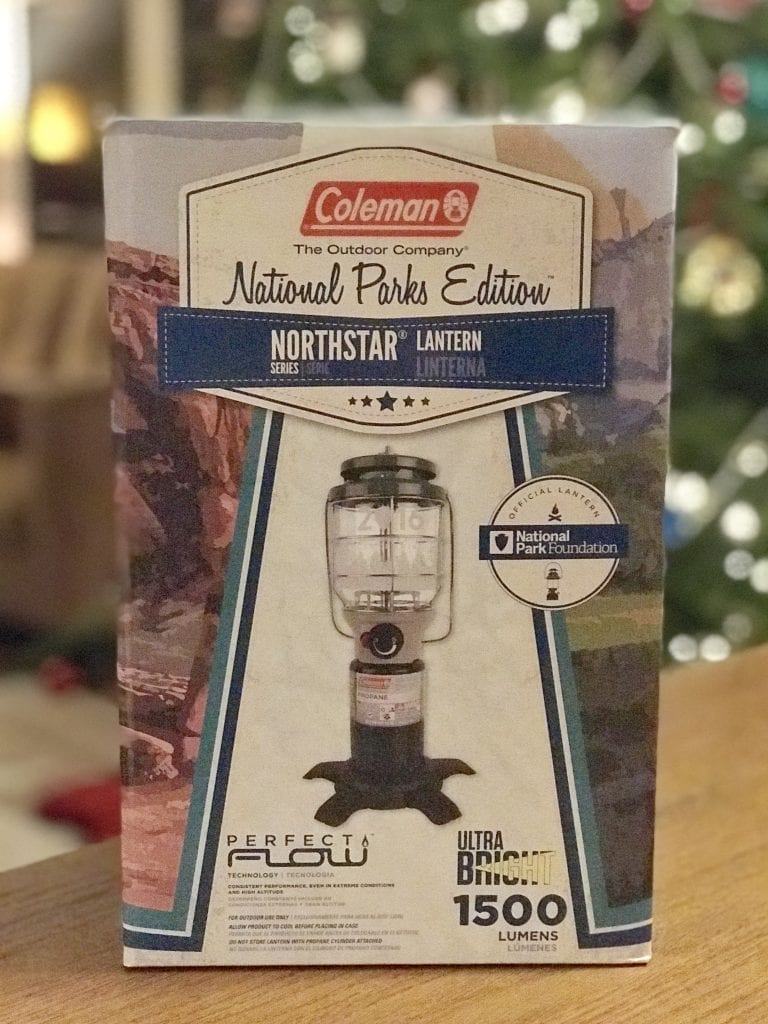 I had to bring back a relic from this magical place for my own camping kit! A classic Coleman stove was a bit out of the budget that night (about $100 bucks) so I bought a propane powered National Parks Limited Edition Lantern. It was beautiful. I wasn’t quite ready for the Dual Fuel lantern yet anyway. I was actually a bit intimidated by the thought of working one and maintaining it.  Now I consider the propane powered stoves and lanterns to be second class citizens. I’m a Dual Fuel guy all the way. Dual Fuel lanterns can run off gasoline or Coleman or Crown “Camp Fuel.” They also require manual pumping to pressurize their fuel tanks. To some this extra work might seem annoying. To folks like Phil and I it is all part of the fun.

Looking for advice on purchasing your own classic Coleman Lantern? Click here to learn more.

When I got back home from that trip I immediately started seeking out used classic Coleman Stoves and Lanterns and started to build my collection. I ended up in a lot of strange garages and backyards seeking these things out. In almost every case I also ended up having a fascinating conversation with an older person reminiscing about camping with their parents or their own kids who had flown the coop. The time I spent purchasing these lanterns and stoves for five and ten dollars apiece were my real time machine experiences. If you dig around in most American garages there are camping stories to be found. 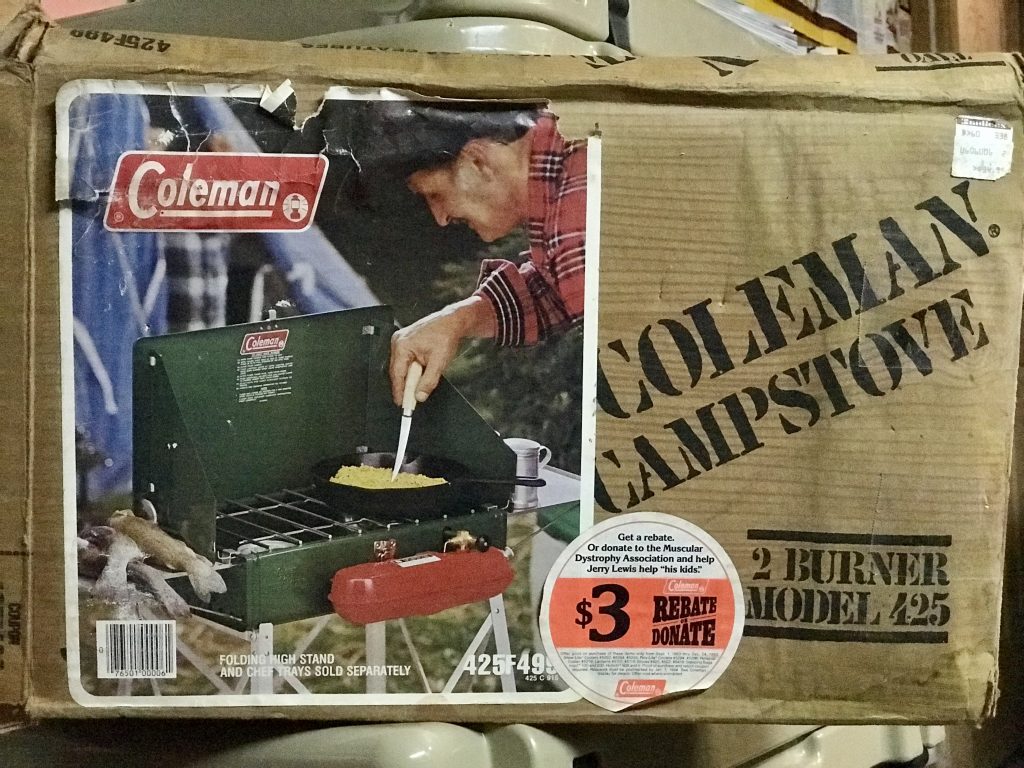 So now, 11 stoves and 16 lanterns later–where am I at with this whole collecting thing? I think that I’m done. That’s where I’m at. Collectively these pieces of camping gear have become a point of contention in my marriage. They take up a lot of room. I’ve spent a good chunk of money on them.  And I spend time trying to find them and fix them up. I have brought a few broken lanterns and stoves roaring back to life. And even though it feels great to do so, I don’t think it is worth the time invested to continue looking for more of them.

I’ve also discovered that owning more lanterns and more stoves does not add any joy to my life. In fact, I think that when I buy more of them I enjoy each of them a little bit less. Ironically, subtracting joy from my life. This is for the simple reason that I use each individual lantern or stove less as I buy more of them. More time is spent storing and maintaining them. Less time is spent enjoying each of them.

I think Phil has it right. Or at least mostly right. He owns one classic Coleman stove and loves it. He also owns one classic Coleman lantern and loves it. Both pieces of gear are thoroughly enjoyed because he uses both of them a lot. The joy is in the use. One camping trip at a time. The joy is not in the accumulation. Gathering dust in the garage one purchase at a time.

So I think you should follow Phil’s example, not mine. I think Phil’s way is the right way.  But I also think that Phil should get a Coleman Kerosene Lantern and a Coleman 426D Three Burner Camp Stove. But not to start a collection. Then why, you might ask?  Because I think he would actually use them. On each and every camping trip.

I’m sure he disagrees.

But I sure do look forward to firing up a couple of lanterns at the campground and trying to convince him.