Mocha Joe’s, Brattleboro (Make Sure to Bring Cash If You Go!) 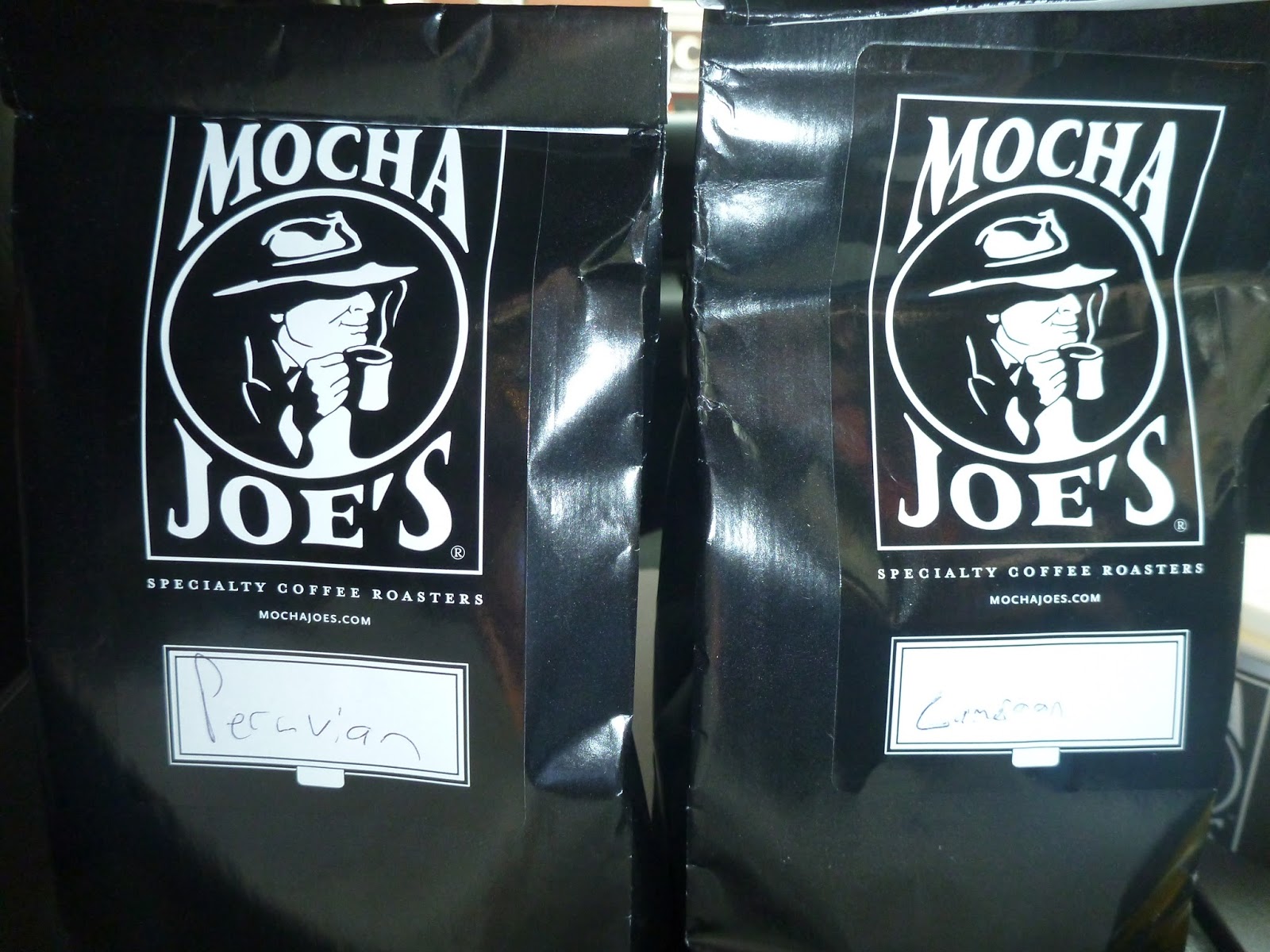 My mother had kindly and sweetly bought us two pounds of Guatemalan coffee from Rook as a gift for our road trip to Vermont.  So there was absolutely no practical reason to head to Mocha Joe’s in downtown Brattleboro at 6:45 am to load up with more good coffee.  But road trips to Vermont with our lively little campers have nothing to do with practicality.  So I loaded Theo and Max up into the truck, very much against their will, and turned left out of the Brattleboro North KOA onto Route 5 South and headed into town.

The boys were grumpy because I had cancelled an early morning showing of the Berenstain Bears and was, for the umpteenth time, taking them to a coffee shop instead of letting them crash around the camper while people try to sleep.  By stepping out, I could get my fresh roasted coffee fix, and simultaneously allow Stephanie and her mom a little early morning peace with just baby Wes in tow.  For some strange reason mommy never complains when I throw her twin boys into the truck and take them on my early morning fact finding missions.

The first thing that you need to know about Mocha Joe’s is that the location is super cool.  They are on the main drag in town but they are located down a flight of stairs below street level… 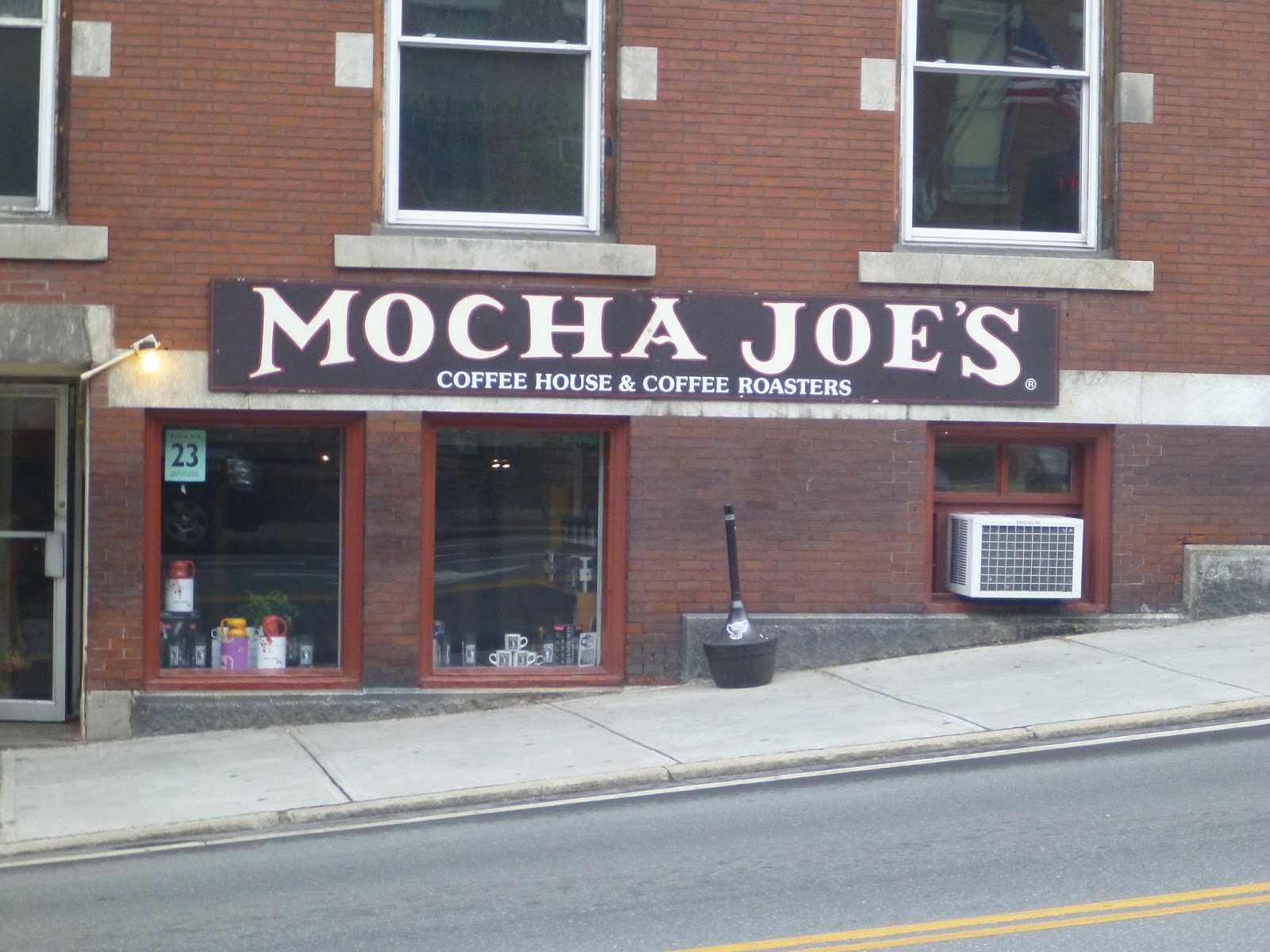 And they have a logo that is also super cool… 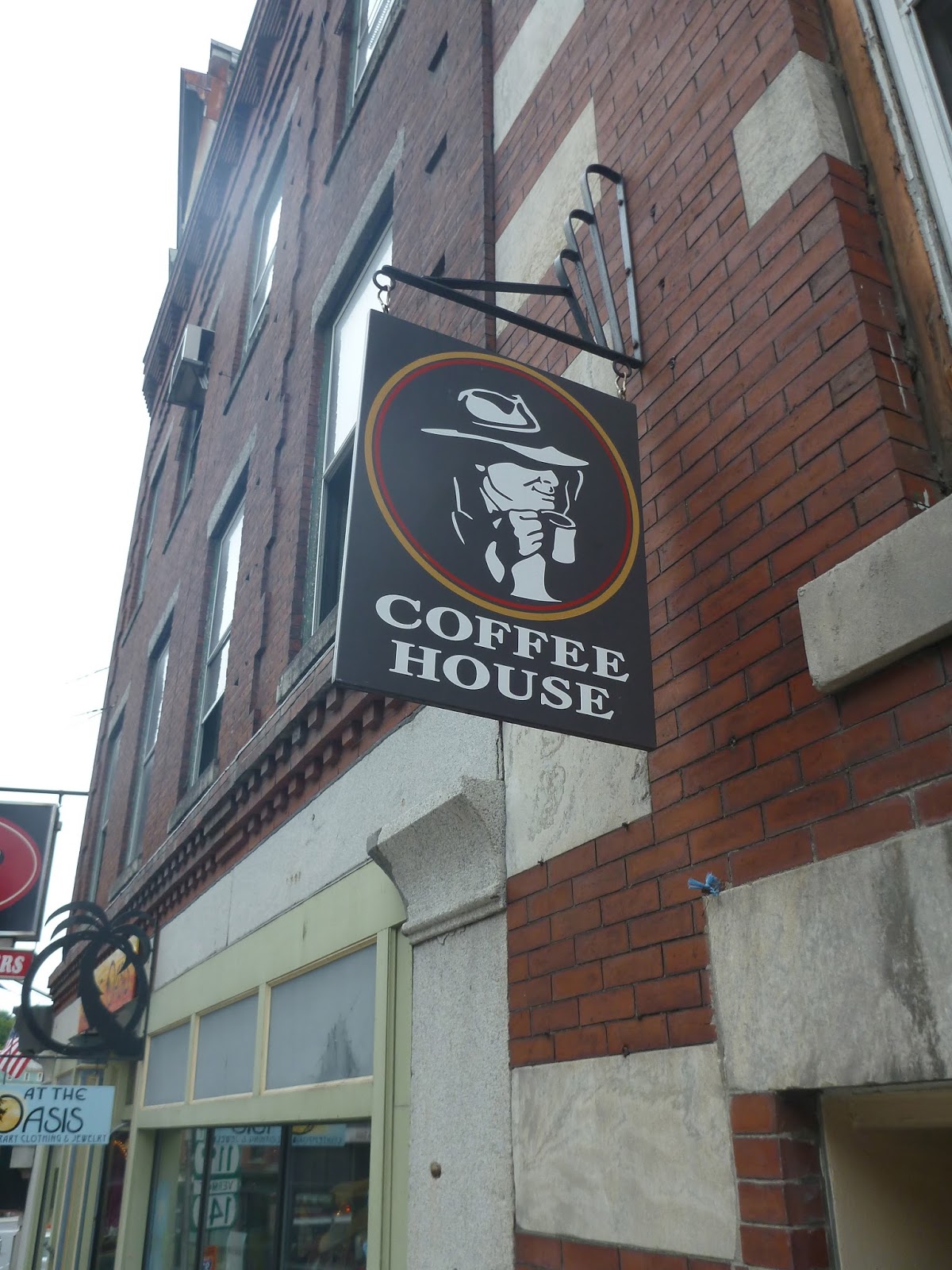 They also have great coffee and a D.I.Y ethic that is not surprising in Vermont.  Their beans are not pre-packaged.  You scoop your own and bag them up at their visually appealing coffee bar–which is also super cool… 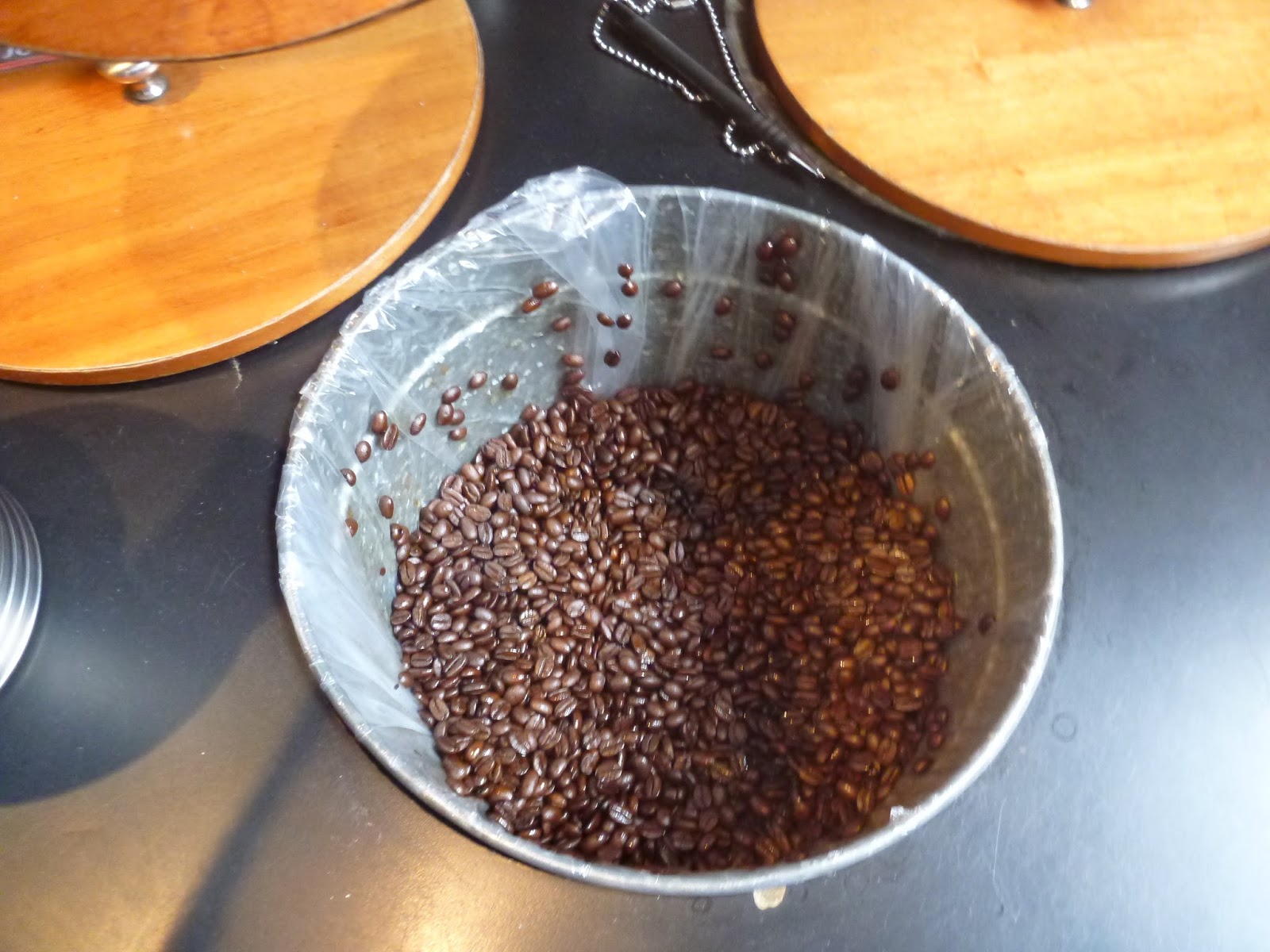 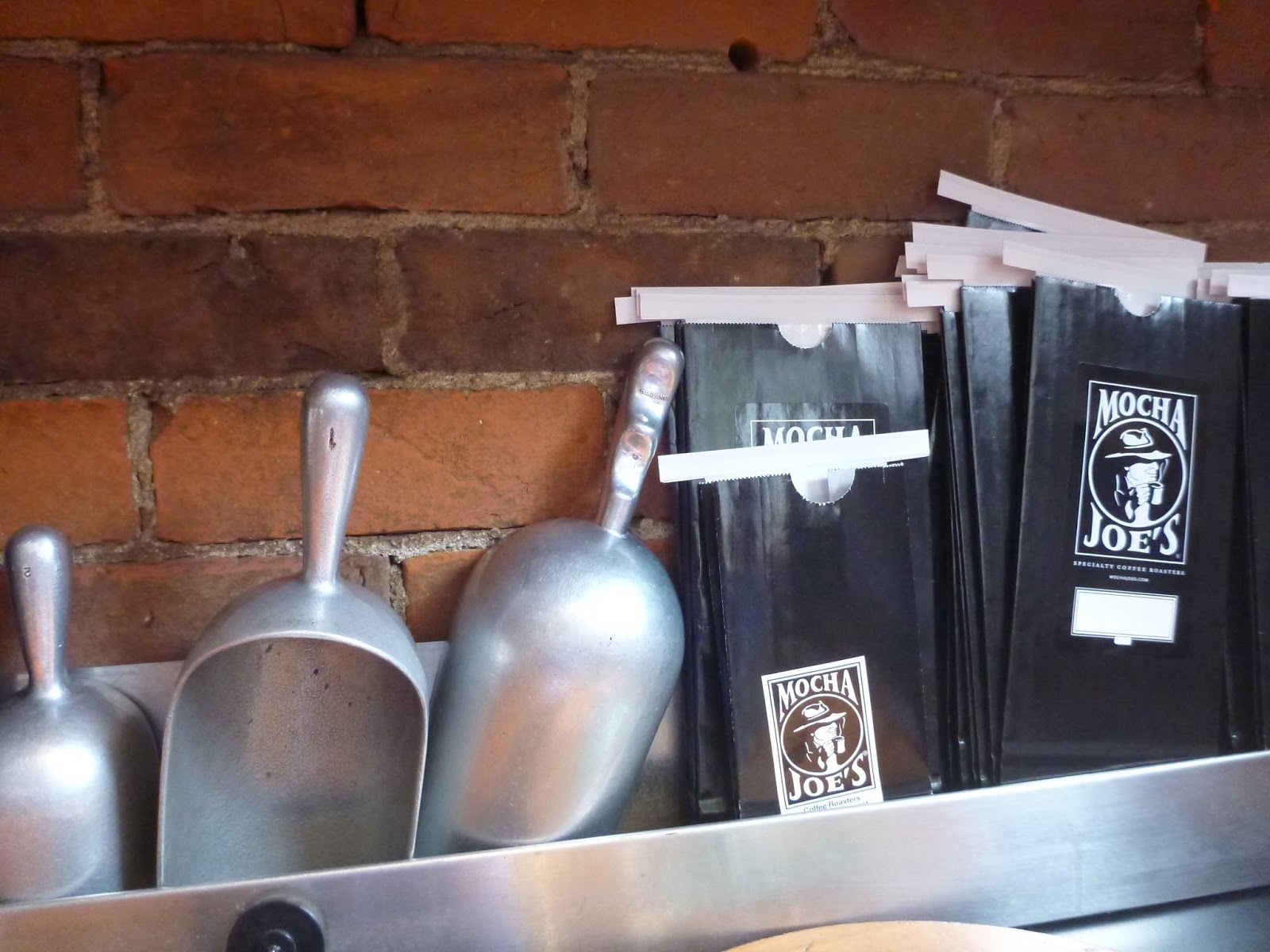 This was fun for me but at the same time I felt that if you are paying a premium price for your coffee someone else should do the scooping and bagging.  I wanted to quickly grab a couple of pounds and sit down with my boys, but instead I ended up having to wait my turn and then futz around with coffee gear while the boys stuck their heads under the back of my shirt and giggled.  I also like a nice label with origin information, but instead had to quickly scrawl out Peruvian, and Cameroon with a slightly dried up pen.  Luckily the Peruvian rocked my world for the next few mornings.
The aggressive hipster ethos of the shop also got on my nerves a bit.  The baristas seem to understand how cool they are and thus, in my estimation, were not very cool.  After I contributed my time and labor to the scooping and packaging of my two pounds of coffee I ended up in line behind a sharply dressed businesswoman.  She ordered a large coffee and had the audacity to hand over a credit card to the youngish, abundantly pierced barista behind the counter.  The barista gave her an unfriendly look and asked her in an impatient voice if she had cash. The woman begin to feverishly dig through her purse fishing for singles.
I didn’t notice any signs declaring a limit for a credit card purchase.  Because there were none.  The businesswoman in front of me looked increasingly embarrassed as she practically turned her purse upside down on the counter.  I was also becoming increasingly annoyed.  The people in line behind me were getting fidgety.  Max and Theo had given up on waiting in line and had climbed up the staircase inside the shop and were jumping down the steps, landing with a thump, and confusing several of the other fashionable young customers who were clearly looking for a much different kind of early morning jolt.
When the businesswoman finally fished out a couple of singles from the depths of her purse everyone in line sighed with relief.  I don’t mind mom and pop stores having a minimum credit card purchase, but I do mind them not posting it and then asking their customers for cash after the plastic has been proffered.  It just feels snarky and slows down the line.
Mocha Joe’s may be a little too cool for school, but the coffee is well worth a class trip.  And did I mention the cider donuts with granulated sugar?  I bought three of those bad boys.  One each for me, Max, and Theo.  After I set the boys up with their milk and donut I snapped a few pictures around the shop.  When I returned to our table all three of the donuts were gone except for some scattered crumbs on the floor.  It was time to clean up the table and get back in line.  Thankfully, I had cash.

Recipe of the Week: Julie's Michigan Sauce
Dear Janine (Lovely, Long-Suffering Waitress at Marconi Beach Restaurant)
Campfire Cuisine, by Robin Donovan (this is for you kitchen dwellers, too)