Why We Don’t Own an Airstream (And Probably Never Will…) 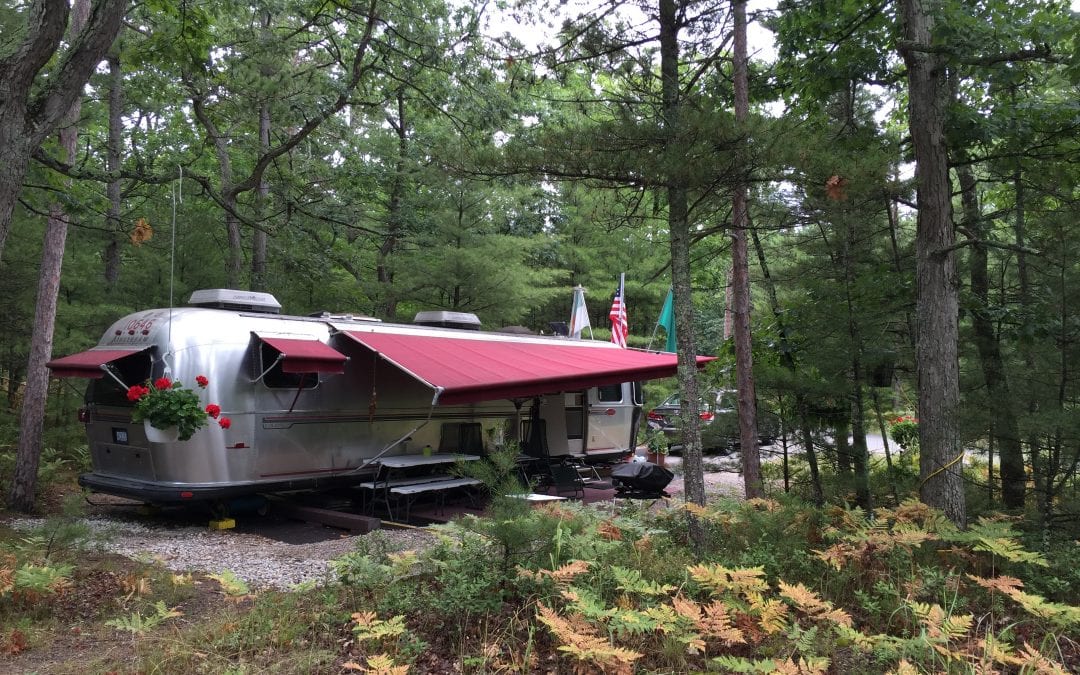 About a month ago we headed south on the Parkway to destroy some White House subs and attend the Atlantic City RV show.  It was freezing cold outside–so the combo of classic roadfood and indoor motorhome window shopping made for a great day.  We strolled up and down the aisles and checked out some ridiculously sweet Class A’s and Class C’s.

Theo really liked this one.  I still can’t figure out why… He also really liked this 40 foot Class A… But he was shocked when I told him the price.  The poor kid doesn’t even get an allowance yet… While Theo was fascinated by the big rigs I was seduced by the glitzy, glittery glamour of the sensationally silver Airstreams.  So I stepped into one.  And was immediately overwhelmed by a memory from somewhere deep in my camping subconscious. Stephanie and I went on our first tent camping trip to Assateague Island about twenty years ago.  We had just started dating.  We had both been there separately, and loved it dearly, but had never been there together.  So we did what most teenagers would have done. We invited all of our friends.  About four of them said yes immediately.  But on the night of departure three of them cancelled.  So that left Stephanie and I heading south on an oh so romantic camping trip…with my buddy Chris riding shotgun.

The trip started out disastrously.  We arrived on a late summer evening to discover that the campground was totally full.  They didn’t take reservations back then.  We were totally bummed.  So we drove around the Ocean City area until we found a campground with an open site.  By the time we found one it was late and we were cranky.  Stephanie was especially cranky.  To make things worse, I had no idea how to set up my new tent.  While Chris and I wrestled with it in the dark, Stephanie paced, cursed, and wondered aloud why I hadn’t practiced opening it at home.  On a more profound level she was probably wondering how she ever ended up camping with two such nincompoops.  Eventually we all fell asleep in the tent with me in the middle.

Sometime after midnight I woke to the sound of Chris’s roaring, cacophonous, coyote-like laughter.  It sounded like he was laughing into a megaphone.  Why?  Because I had rolled over in my sleep and wrapped my arm around him like he was my security blanket, my favorite childhood teddy, and my momma on a stormy night all rolled up into one.  While Chris woke up the entire campground, I rolled over, put my arm around Stephanie, and immediately fell back to sleep.  It had been a long day.

When we woke up the next morning and started packing my Pontiac LeMans we realized that everyone was staring at us.  We also noticed that the campground was a total dump.  We hightailed it out of there and lined up for a campsite back at Assateague–and, thank God, we got one.  While we were setting up our tent again (a bit more quickly this time) I noticed a married couple on the site next to us sitting under the awning of a beautiful, silver, super-sexy Airstream Travel Trailer. They were sipping cocktails and looking so relaxed. So sleek. So happy. Like a Viagra commercial.  And there I was, struggling with my tent again, and getting ready to spend another romantic night with Stephanie–and Chris.

Well, three kids later the Airstream hasn’t happened.  But the RVing has–in spades. You see, Airstreams are not really the best option for campers with kids.  And that’s okay.  I love our Jayco Travel Trailer.  I love Max, Theo, and Wes.  And I love Stephanie.  I have really found my bliss.  As we were checking out that Airstream at the Atlantic City RV Show I asked Stephanie if she remembered that first camping trip with Chris.  She said “yes.”  I asked her if she could picture us traveling the backroads of America one day towing a sweet Airstream like this one?  She said “well, maybe…”  I was completely flummoxed.  Why the heck not?  Because, according to her, and I quote,  “you have to really love each other to travel in an Airstream.” Feeling a bit hurt I asked her what she meant.  “There’s not a lot of room in here,” she replied.  I looked around at the relatively cramped quarters of the Airstream and understood her perfectly.

Some marriages are meant for slide outs.  And bunk houses.  And that’s just fine with me.

A Week Without Tuesday (Our Guest Bloggers Warm Up For New Zealand)
I Really, Really Like My Kids…Most of the Time (and mostly outside)

RV Organization: We Are Calling In An Expert
RV Winterization: Preparing Your RV For Winter Storage
The Classic RV Story: Laura Has One, Do You?