Return to Bubble Pond: The Past, Present, and Future 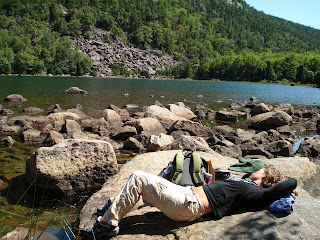 It may be cliche to say it, but I don’t care.  Having kids makes everything new again.  The first time Stephanie and I went to Acadia National Park together was back in 2007.  We had an awesome trip and did a lot of hiking and biking–accompanied by a lot of relaxing.  After the bike ride that was recounted in the last post, Stephanie decided to kick back and relax on a warm rock next to Bubble Pond.  She had earned it. Before we had the boys relaxation was an option at any point in the day. Particularly on a summer vacation. It makes sense right?  You do something strenuous and then you relax and take a nap. Preferably somewhere that is quiet and beautiful. Preferably somewhere in Acadia National Park.

Flash forward four years and two boys later.  We are back in Acadia.  We have returned to Bubble Pond.  We have just finished a six mile hike.  Time to relax, right?  No. Not even friggin’ close. Time for more activity, more adventure, MORE EXPLORATION.  Max and Theo are not interested in taking a nap on a warm rock.  They just had a nap while momma, da-da, and grandma took turns pushing them in their super-hip all terrain baby stroller (The B.O.B).  Max and Theo are now interested in jumping off of warm rocks. And finding frogs.  And splashing in the water. And finding powerful, magical sticks!

I have been to Bubble Pond twice.  It was lovely on both occasions.  During the first trip it was peaceful and relaxing.  During the second trip it was exciting and magical.  Both trips to the same place were totally different.  This is one of my favorites parts of being a father.  When we take the boys to our favorite places they become new again.  Or different.  Or deeper. Or richer.  Or maybe just better. 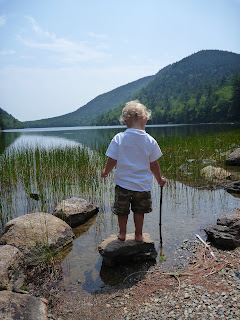 Onward.
Six Miles? No Problem! (Listen for the Laughter of the Gods)
Sometimes You Have to Get the Baby off Your Back: Dating in Acadia

Watkins Glen State Park: Next Stop on the Great Empire Pass Tour
A New Year's Wish for Strong and Adventurous Women
The Road Not Taken: My Imagined Life as A Communist