One Fish, Two Fish, the Campers Caught You Fish! 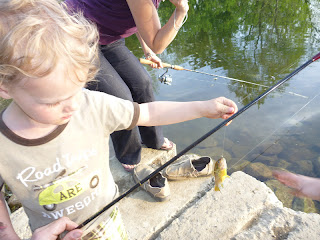 Jeremy and I have mentioned quite a few times over the last year that we would really love to get the boys out fishing. The conversation comes up, we nod in agreement, and then the subject is dropped with no action taken.

What’s the big deal, you might ask. You can drag your toddlers up to Acadia National Park for weeks on end, but you can’t get a $10 Spiderman fishing pole and mosey on down to the lake?

I know. Jeremy and I both grew up on the water. I had a river in my backyard and he had the Atlantic Ocean.  We both dabbled in fishing or crabbing here and there, but neither of us took it very seriously. So I had this feeling like we might wind up with a fish hooked on a pole and not a parent in sight who was willing to deal with the issue.

Lucky for us, we have our friend Joe. After the ice cream social at the West Chester KOA last weekend, Joe stuffed some leftover hotdogs in his pocket and led the kids like a bunch of ducklings down to the Brandywine river, which runs through the campground.

He made sure each of the boys got to reel in a fish (thank you, universe, for cooperating!). The fish were examined, photographed, unhooked, and thrown back in record time. 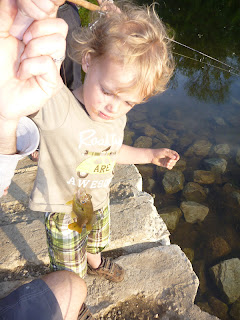 I want my boys to be the type of boys who fish. I want them to pack supplies, walk to the water, and patiently wait for that stroke of good luck. I want them to kick into gear when they feel a tug on their line. I want them to know what quiet expectation feels like, even thought they are the loudest two boys I have ever met.

Mostly I want them to know the rewards of waiting patiently for nature to provide just one second of joy. Like when you stare at a night sky for ages, just hoping to catch sight of a shooting star. It is always worth that investment–every time.

It is harder and harder these days to find that quiet. We bring our iPhones to the campfire and our DVDs on car rides. I can’t even imagine what it will be like for my boys in ten years.

But maybe fishing will help. I’m going to buy them those stupid Spiderman fishing poles and give it a shot. This time I mean it. Really.

The Art of Outdoor Hospitality: An Interview with KOA CEO
The World’s Toughest Three-Year Old Camper: You Gonna Mess?